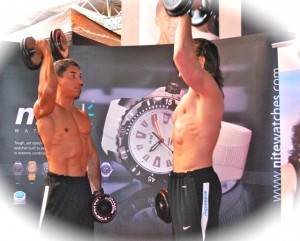 As I sit and write this blog, halfway home from this weekend’s Hour of Power Certification Course…late at night in a quiet Service Station café, somewhere on the M1… it is strange to think that just two days ago one of our most inspirational and dedicated Instructors died unfairly of Leukemia. Xavier Dolino, aged 37…one of the most passionate health and fitness crusaders I will probably ever meet.

There are some people who stumble their way casually through life, taking for granted their health, their blessings and their chances in life. Xavier was not one of these. He worked tirelessly in everything he did. He was passionate about the things he did. Sometimes perhaps too passionate – sometimes he cared too much. He didn’t just want to teach fitness…he wanted to let everyone experience what it meant to feel vital and feel alive.

Why leukemia strikes a person down I have no idea. Is it stress? Is it genetic? Is it bad luck? Is it due to the environment we live in?  Honestly I have no idea – perhaps it is all of these things. But what I know is that Xavier tried his damned best to do things the right way. To honour his body…to challenge his body…to do it to his best…and then to encourage everyone around him to do the same thing. And in this process twice he was hit with Leukemia. Twice he was told he was dying. Twice he recovered!  But the third time he did not .

Sometimes around Xavier I didn’t know what to say – it was like he wanted so much from life that even I couldn’t suggest any more! Sometimes I had to tell him to stop and breath…and take it a bit more laid back. But you can’t really control a person’s passion …the whole point is that passion is often ever so slightly out of control. That’s why it’s called passion. IF it was completely calm and laid back it would be called wisdom or simply ‘purpose’…but passion is that something more.

When I wrote the song ‘Time’ I was thinking of my Grandfather wanting a little more time with his family… a little more time on this earth. I was thinking of my father always wanting a little more from his goals and his ideas. I was not thinking of Xavier…but now as I think about the words of the song – I realize that it was about someone like Xavier too. He just wanted a little more from everything he believed in. Mediocre was not enough.  When he first recovered from Leukemia and extreme Chemotherapy his goal was not just to start exercising again…it was to be back on stage at the national endurance lifting finals in Birmingham. And he did it.

Today is Xavier’s funeral. And although life doesn’t stop for any man. Wheels keep turning, appointments still have to be kept. Clocks keep ticking & schedules stay busy… although all this is true and perhaps not many people will physically be at his small funeral in Verona, Italy. Something else is also true. Xavier’s life impacted a lot of people and when his life stopped a few days ago, it did not go unnoticed. And though his life stopped, his spirit and his goals will never stop. He dreamed of running a fitness retreat using the principles of Fitness4x4 training – that will happen, and when it does, his name will be attached to it firmly..as a visionary, as a loyal friend, as a fighter and as someone who truly lived this short life.

Want to become a Specialist Fitness4x4 Trainer or Hour of Power® Certified Instructor?

If you are interested in becoming part of the TEAM as a certified 'HOP' instructor or specialist '4x4' personal trainer, or you are a Health Club/Gym interested in training your staff to teach this method, please contact us directly at +44 (0)1895 730004 or [email protected]